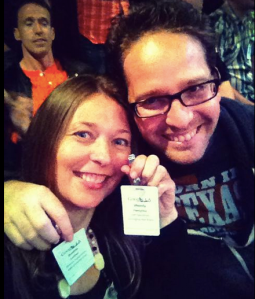 The Google LA speaker series has been going on for about a year now. Last week Dustin and I were lucky enough to get ourselves on the invite list to hear Eric Schmidt and Jared Cohen discuss their new book. Visiting a Google campus is always a treat and the Google LA facility, which is located in Venice just a couple blocks from the beach and down the street from the famous Gold’s Gym, did not disappoint. And neither did the evenings conversations.

Eric Schmidt became well-known for his role as Chairman at Google and was one of the key players in taking the company from a start-up to the sensation we know it as today. Jared Cohen is also a Google veteran in his role as Director of Ideas. Prior to his Google life he was a former adviser to secretaries of state Condoleezza Rice and Hillary Clinton. The two men combined their passions for technology and world affairs to collaborate on the writing of The New Digital Age: Reshaping the Future of People, Nations and Business.

The pair travelled to dozens of developing countries to research the impact of gaining access to the Internet will have on the people’s futures and to learn about their past. Much speculation was made about  how access to an online world might have changed the outcome of some pretty horrible events. To learn more about these stories you’ll have to read the book.

Here are a couple of topics that were discussed that I found of particular interest (bring these out at your next dinner party and have fun!):

There were lots of interesting statements that got woven into the conversations. Here are a few that I made note of:

When the two men were asked how they managed to write the book with their vast professional commitments and travelling schedules, they answered with a grin “We used Google Docs”. That got a groan from the crowd.

Thanks Google for a fun night!

I've spent my career working with people and organizations to help them build their brands. We live in a connected world where that line between a personal and professional persona has become nonexistent. Your brand is you 24/7. This blog is about me and my life. Some of it will relate to my passion for the real estate industry and some of it will just be about me living life and exploring my interests. The opinions expressed here are my own personal opinions. View more posts