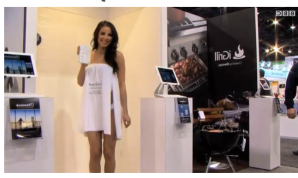 Here’s the scene: you are at a conference and are walking the trade show floor. You can’t help but notice the beautiful women “working the booth” or as they have become know the “booth babes”. The booth babe is usually supported by a smart-looking guy who is there to answer questions on the product or service after the irresistible women has lured the passerby in.

Booth babes recently got lots of attention at the annual Consumer Electronics Show (CES) in Las Vegas. Although not the kind of attention the companies who hired them were likely hoping for.

Like many conferences beautiful models dressed in provocative clothing were hired to work the booths. This tactic typically ranges anywhere from annoying, to uncomfortable, to inappropriate. Yet, companies still keep doing it. The good news is that both female and male attendees spoke up this year in protest of this outdated marketing strategy.

The booth babe controversy really got legs (ha, ha) when the BBC interviewed a booth babe who said the following:

You can see this for yourself plus an example of a man hitting on a booth babe in this BBC video from the CES floor.

So, there is an easy solution to this one– enough with the booth babes. Let’s get the smart people who are the experts (male or female) out in front of the crowds talking about what they do. It’s time!

I've spent my career working with people and organizations to help them build their brands. We live in a connected world where that line between a personal and professional persona has become nonexistent. Your brand is you 24/7. This blog is about me and my life. Some of it will relate to my passion for the real estate industry and some of it will just be about me living life and exploring my interests. The opinions expressed here are my own personal opinions. View more posts

3 thoughts on “The Booth Babe”